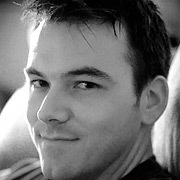 Brandon Young has been creating visual effects for games, commercials and film for seven years. As a VFX artist, Brandon has worked with many studios in Los Angeles including Blur Studio, Spatial Harmonics Group, Scanline VFX and Luma Pictures, where he worked on projects such as G.I. Joe, 2012, and Thor, as well as serving as Environment Lead on 2012. He received his degree in Animation Art and Design from the Art Institute of Seattle. While in school, Brandon studied matte painting and concept art, but 'fell' into FX animation and loved it. He has kept to his illustration roots, however, by showing his traditional and digital paintings in Los Angeles galleries.