In this series, Marc Gabbana walks you through his process as he creates the TribalBot, a forest dwelling robotic vehicle. In this first volume, he begins with 2D orthographic and perspective drawings and walks you through his artistic process, as he develops them into more realized and finished images. Working with traditional medium such as pencil, pen and marker, he shows you how he bring his ideas to life. He covers some shading and perspective concepts, steps which are necessary to make the work appear more realistic. Marc combines his passions for drawing, perspective and industrial design and stresses exploration of shapes and forms to create never before seen walking vehicles of all sorts. The final image is a fully detailed pen drawing of the TribalBot. 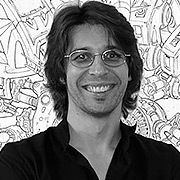 Marc has been working in the film, advertising, game and publishing industries for the past 20 years. He attended Lawrence Institute of Technology, where he studied architecture before graduating from the Center for Creative Studies in Detroit in 1990. Having worked with Lucas, Spielberg, the Wachowskis and Zemeckis, Marc's film credits include Star Wars: The Phantom Menace & Attack of the Clones, Matrix Reloaded & Revolutions, Polar Express, War of the Worlds, Jimmy Neutron-Boy Genius, 8 Mile, Hellboy and IMAX's first all CG 3D movie Cyberworld where he worked as Production Designer. Recent movies include Beowulf, Monster House and Disney's A Christmas Carol where he was Art Director. Recent game titles include BioShock 2 and Iron Man 2. Marc continues to create images both traditionally and digitally with an emphasis on architectural, vehicle, creature, character and environmental design; works that reflect his own unique vision. His creative passion is to bring to life the myriad of creatures and monsters crawling around in his head.