In this lecture, Keith Thompson reveals his process for taking a zombie creature concept from a thumbnail sketch to the finished drawing. Keith demonstrates each step, from idea development and creating the initial drawing using traditional media to scanning the drawing into the computer and then applying colored glazes in Adobe Photoshop®. Keith also explains how to maintain the essential gesture and feel of the thumbnail all the way through to the final concept art. The entire traditional media to digital process is also applied to a collection of extra views of the character. Keith explains how these alternate angles and a set of orthographic rotations are designed to help the 3D modeler. 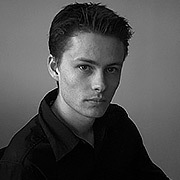 Keith Thompson's unique art and visual design have become well recognized around the world.  He has regularly designed on Guillermo Del Toro's many projects for the past decade, including Pacific Rim, Crimson Peak, and At the Mountains of Madness with James Cameron. His creature design on David Bruckner's The Ritual has also received critical acclaim. Additionally, he is a multiple New York Times Bestselling Illustrator of many books, including the Leviathan Trilogy. Keith has also been extensively involved in games, designing on the first Borderlands, as well as designing the world of Warframe. His art, including originals used for feature films, has been exhibited in museums across the globe.